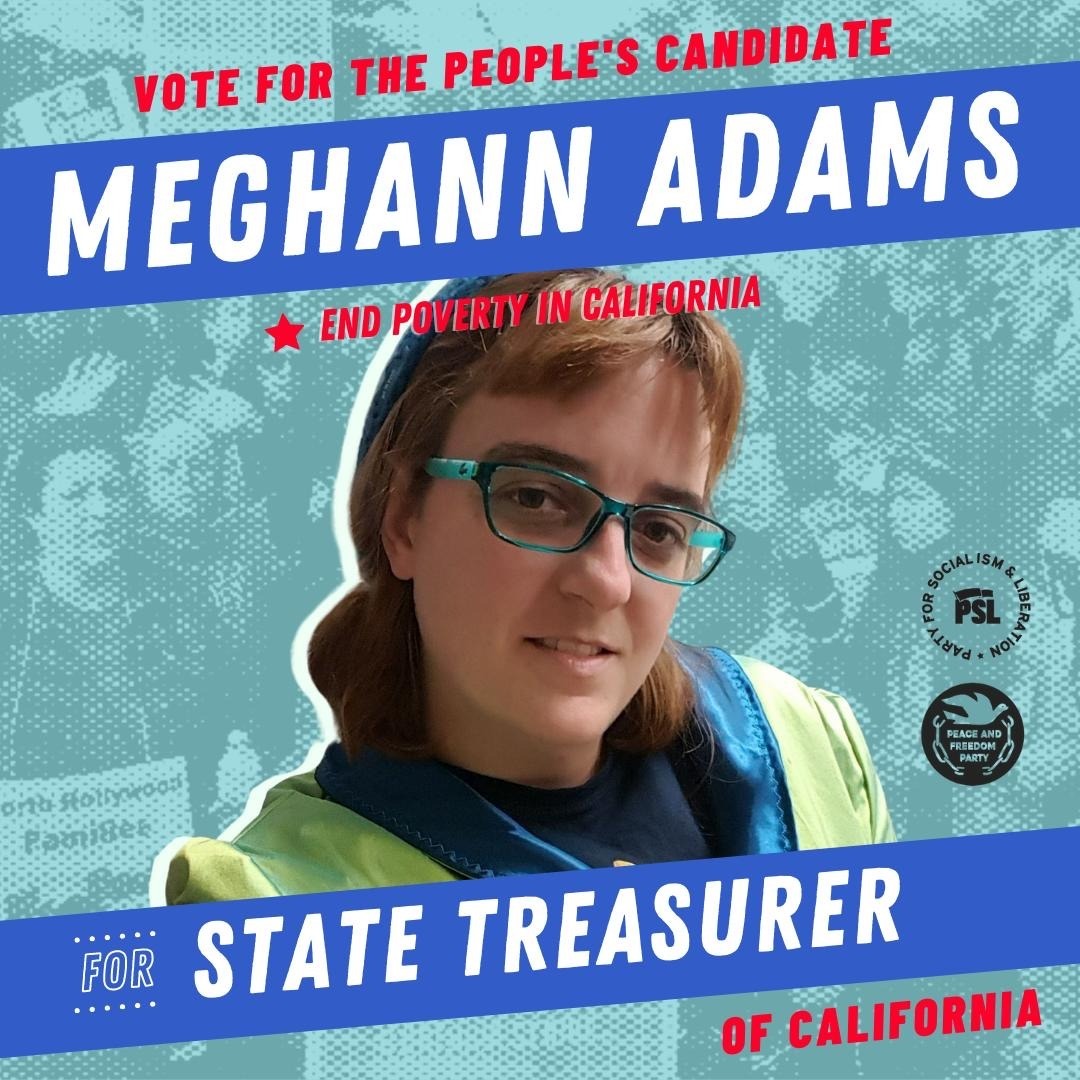 Meghann Adams is the Peace and Freedom Party candidate for State Treasurer in the June primary of Election 2022. She has also been endorsed by the Green Party and is a Left Unity Slate candidate in this election.

Candidate bio: Meghann Adams
Meghann Adams has been a Bay Area local for 15 years, and she has continuously contributed to and stood up for her community. She is an anti-war activist with the ANSWER Coalition, and has been locally organizing with the Party for Socialism and Liberation for 14 years. During those years, Meghann has been a part of many different struggles, the most recent of which are the Cancel the Rents campaign, and No Cuts to the Classroom.

Meghann has been at the forefront of the women’s liberation movement, and is also a writer for the Breaking the Chains Magazine. Currently, Adams is the president of SMART 1741 (representing San Francisco and San Mateo school bus drivers and staff), after 7 years of being active in the union. After being a treasurer for the Gloria La Riva 2016 campaign, she is now running for state treasurer with her campaign, “End poverty in California!”

Meghann Adams for State Treasurer: The Platform
As state treasurer, Meghann Adams calls to defund and demilitarize the police, including detention centers and prisons. Her aim is the transformation of the military budget to fund people’s needs. Those funds which are currently used to incarcerate citizens could be better used to fund infrastructure across California, such as to build more parks, to make clean water more accessible, and to increase the reach and efficiency of public transit. Those funds could also be used to expand California’s social assistance programs, regardless of citizenship status, and to provide more money for retirement.

As state treasurer, Meghann will work to keep money from going to environmentally destructive programs and industries, for this is a priority long overdue. Programs are needed to combat California’s fire season and make our forests more resilient, as well as reducing if not ending all sewage spills.

Meghann will push to allocate more money to schools, especially after the public education system has been threatened during this pandemic due to a history of poor planning. Adams recognizes the state's ability to provide healthcare for all and to provide better funding for medicine, and recognizes universal healthcare as a human right. Additionally, she recognizes housing as a human right and calls to end poverty in California.