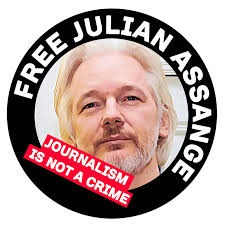 A statement on Wikileaks founder/journalist Julian Assange, still imprisoned under sham charges, has been making the rounds of peace & justice organizations, appearing on a number of websites since its original publication. (For a much more extensive version of this statement, please click here for Jeff Mackler’s piece on SocialistAction.org.)

Peace and Freedom Party has long stood against this continued persecution of a journalist for the crime of reporting news. For a detailed piece on Mr. Assange’s plight, please see this piece from 2019 by Joe Delaplaine on the Assange case, abuses of the Espionage Act by two former Presidents of the US, and the ominous precedent this situation sets.

Below runs the entire statement, which PFP endorses.

Assange faces charges under the 1917 U.S. Espionage Act. Prosecution under that WWI anti-democratic law placed thousands of antiwar activists in prison for exercising their free speech right to protest WWI.

Some 100 Times reporters evaluated Pentagon confidential documents obtained under the Freedom of Information Act. These included reports on 50,000 U.S. airstrikes on Iraq, Syria and Afghanistan conducted under the Obama and Trump administrations. The Times on-the-scene reporters subsequently confirmed tens of thousands of civilian casualties – collateral damage.

“The [Pentagon] documents,” according to The Times, “identify children killed or injured in 27 percent of cases; in The Times’s ground-breaking reporting it was 62 percent.”

The Times and several other major publications worldwide reprinted much of the same Pentagon material that Assange’s Wikileaks released to the world. Yet Assange faces a life in prison for publishing the truth.

The persecution of Julian Assange by the U.S. government is a threat against free speech and free press. It is also a threat to the Peace Movement and all movements for social change since without information and the ability to speak and write freely about U.S. wars and war crimes we are greatly limited, and the people of the world are kept in the dark.