On May 1, 2018, longtime Peace and Freedom Party member C.T. Weber delivered the opening remarks at the International Workers Day gathering at the State Capitol in Sacramento. The following is the text of those remarks, a comment on the events of a May Day 135 years past and on the worker’s continued struggle in our time. 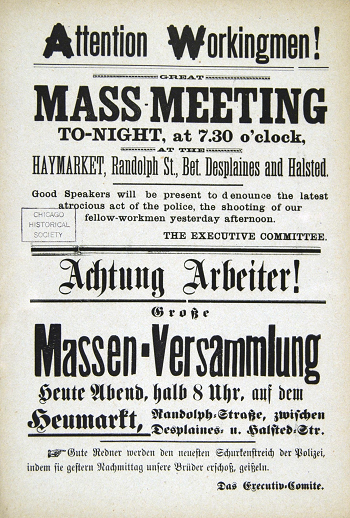 Sisters and brothers, my name is C. T. Weber. I bring you greetings from Peace and Freedom Party, conceived over 50 years ago out of the struggles of the freedom rides, the farm workers’ union organizing, and the anti-war movements. Today, we are California’s only ballot-qualified socialist party.

We gather with you today, International Workers’ Day, in a spirit of solidarity and for the expansion of the growing power of working people that is present in our current struggle with the 1%.

In doing so, we must not let the memory of workers’ struggles fade into history. In 1884, at a time when thousands of men, women and children were dying every year from poor working conditions and long hours, the Federation of Organized Trade and Labor Unions (later AFL) at their convention in Chicago proclaimed, “Eight hours shall constitute a legal day’s labor from and after May 1, 1886”. In 1885, the largest union, the Knights of Labor backed the proclamation and both groups encouraged workers to strike and demonstrate.

On May 1, 1886, 300,000 workers (40,000 in Chicago alone) from 13,000 businesses walked out. By May 3, tensions ran high at the McCormack Harvesting Machine Company, where union molders had been locked out since February. Police fired into the crowd killing a number or workers. That evening anarchist organizers called for another demonstration the next day, May 4, 1886.

That is when thousands of workers gathered in Haymarket Square in Chicago in reaction to the killing of several workers the previous day by the police and to demand an eight-hour workday. That is 8 hours to work, 8 hours to rest, and 8 hours to do with what we want. The police called an unlawful assembly and marched toward the demonstrators when someone threw a bomb that killed a policeman.

During the riot that followed, seven policemen and at least four workers were killed. This lead to the arrest of eight anarchist labor organizers, four of whom were hanged on November 11, 1887 and one who committed suicide in his jail cell the night before. The other three were pardoned in 1893, by a later governor.

In solidarity with these martyrs, workers around the world agitated for and won May 1st as a holiday to commemorate this American struggle for an eight-hour workday and other workers’ demands. Now we must struggle to bring May 1st home.

Let me leave you with this: The defendants appealed to the Supreme Court of Illinois where the petition for certiorari was denied. On November 10, 1887, the day before they were to be hanged, the Governor commuted the sentences of Samuel Fielden and Michael Schwab to life in prison.

That evening, the day before he was to be hanged, Louis Lingg committed suicide.

The three living defendants, Fielden, Schwab, and Neebe, were pardoned in 1893 by a later governor.

As the great spiritual forecasts, “We shall overcome – someday.” Sí se puede.