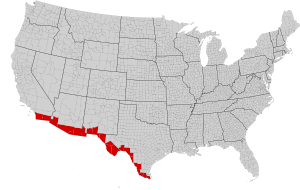 The President’s threat to close our southern border is not only heartless and draconian, it’s exactly the kind of action that has lead to so many undocumented people living in the U.S.

Before 9/11, and before all this racist hysteria about our porous borders, many, many migrant laborers easily crossed the border each year to work seasonal jobs in the United States. And when those jobs were over, they returned to their families and their homes south of the border. When the border became harder to commute across, many migrant workers found it much more difficult to come north for those jobs. Some gave up, but many chose to just stay here. They became undocumented. Families, if they couldn’t get across the border, were split up. Tightening up the border may have kept some people out, but it also kept many people in.

No citizenship requirement for driver’s licenses also meant that we had licensed, knowledgeable drivers on the road. There are no good reasons to require proof of citizenship in order to get a drivers license. Passing the tests should be enough.

Let’s welcome immigrants, let them become full citizens, and join with them to fight for our common interests: productive jobs, a clean environment, peace, and an America that lives up to the promise engraved on the Statue of Liberty.