Two propositions on the November ballot address the seemingly inevitable legalization of sports betting in California – 33 state governments have done so since the Supreme Court decision of May 2018 invalidating the Professional and Amateur Sports Protection Act. The aims and ends of Propositions 26 and 27 could not be more different, however. 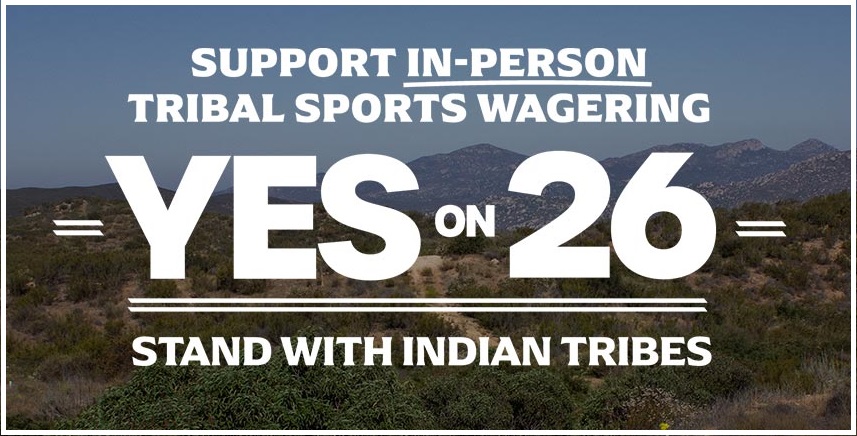 Under current California law, Native American tribes have a near monopoly on providing casino gaming. The tribal casinos are not privately owned; they are owned by the local tribal governments, and the profits go for their social needs. Proposition 26 would allow sports betting in the state of California, but only in locations currently providing casino games.

According to the OC Register of August 19, 2022, the California state government has established gaming compacts with 79 tribes; agreements with another four are pending. Sixty-six casinos operated by 63 tribes are currently open for business in California. In 2021, these 63 tribes paid approximately $65 million in regulatory fees and in support of gambling addiction programs and "tens of millions" in local taxation. Another $150 million is redistributed from the state’s bigger gaming providers to those tribes who host 350 slot machines or fewer.

Proposition 27: Vote NO to keep revenue in California
Proposition 27 would allow online sports betting within California state limits, while putting a 10% tax on sports betting revenues and licensing fees. It is written, sponsored and bankrolled by some private gambling corporations, and these corporations would take in at least 90% of the money from web-based sports betting that would represent a huge expansion of gambling in California. An undefined portion of the 10% will be divided 85/15 and devoted to the California Solutions to Homelessness and Mental Health Support Account and the Tribal Economic Development Account, respectively.

Pragmatically speaking, if Proposition 27 were to pass, online sports betting would be available to all Californians with an internet connection as soon as January 1, 2023. As has typically been the case in the state-by-state legalization of sports betting, certain New Jersey-based operators have a massive head start over any competition with their turnkey sportsbook sites.

And, since a maximum of 1.5% will be peripherally invested in California’s Tribal Economic Development Account, we can easily calculate that for every $100 million in profit that online sports betting generates, the state’s tribes will get to share $1.5 million. For comparison’s sake, the state of New York, with a similar-sized sports betting market, receives about $110 million in its share of revenue from online sports betting per month. Similar numbers would result in a total of about $20 million to the tribal account and about $112 million for homelessness. To put this in perspective, the state of California has spent an average of $6 billion per year on the homelessness issue for the past five years. And that has not put much of a dent in the housing shortage.

To top everything off, a group of interests funded by Penn Interactive Ventures, FBG Enterprises Opco LLC and Bet MGM are backing a mammoth advertising campaign loaded with Orwellian-style mistruths. For example, they claim that there is strong protection against under-age gambling in Prop 27 (there isn’t) and say that Prop 26 provides no such protection. Nonsense: under-age people are not allowed into the tribal casinos. Further, Prop 26 would not expand the gambling locations, just the nature of some of the games.

The truth is that at least 50 Native American tribes, six homelessness/low-income advocacy groups, three workers’ unions along with dozens of organizations from across the state oppose Prop 27.

A majority of the states now have some form of legal sports betting. There are two models for it: the tribal model and the corporate model. This choice between Props 26 and 27 gives us a vote on which model will be adopted in California. Sports betting is coming, sooner or later. Let’s keep it in the tribal casinos, and freeze the corporate liars out.